This summer vacation, I'm trying to step up the authenticity (and documentation) of our garb, using materials I have on hand. As such, I'm recycling projects that either turned out a little wonky or just don't fit into our current costuming needs.

For today's endeavor, it was a teal linen Edwardian skirt that hit the block. I adored this skirt, but it's been a year and I didn't have a single excuse to wear it. I decided to go the Viking apron dress route, because a) I wanted another linen one for summer wear and b) It was constructed of six narrow wedges, so an apron dress would be the most efficient use of the fabric without extensive piecing.

After several days (and evenings) with the seam ripper, the only machine stitches that remained were a couple edges that I had done a zig-zag stitch on to keep it from fraying. Taking that out would have encouraged more raveling, so I went ahead and stopped there.

I decided to base the construction on Countess Gwen's Viking Clothing class at Gulf Wars XXII. She had made some interesting arguments for using period weaving widths when considering garb construction. Today's linens tend to be around 50" wide, while she said period widths would be up to 24" wide, but generally closer to 18" due to the human arm span. Because of this, she suggested that the apron dress would most likely be constructed with loom widths and gores. The construction diagram she showed us had three rectangles and three gores.

I like my apron dresses to be 41" long, so with a top and bottom 1/2" seam allowance I'd need rectangles that were 42" long. For the width, you take your bust measurement, divide it by three, and add seam allowance.

But that's just cutting out the pattern! 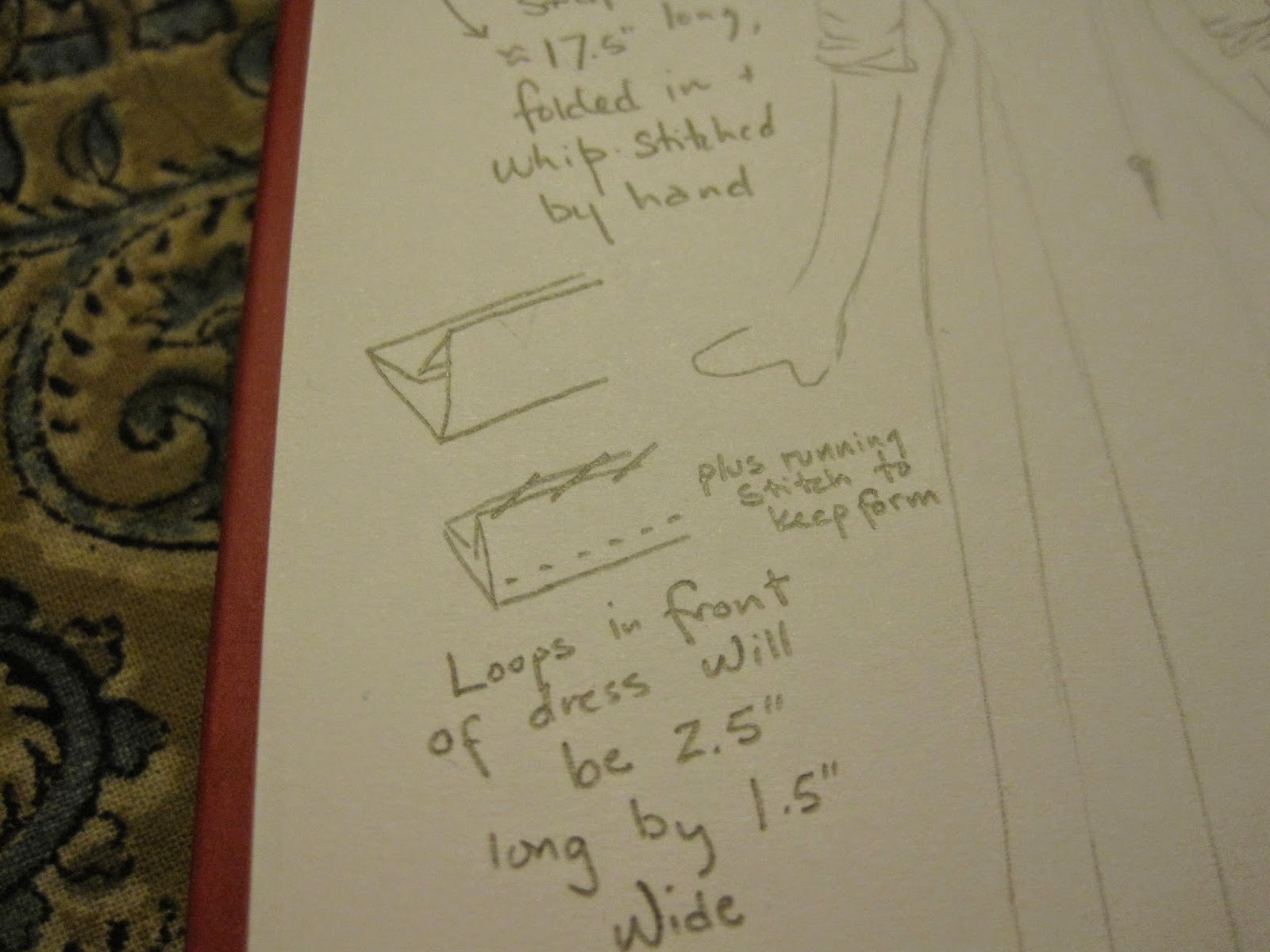 The straps and front loops were a little more problematic. There are a lot of opinions out there, and even less in terms of actual facts.

When you look at Viking SCAdians and re-enactors, about half the time you're going to see the loop strap construction, while the rest have a wider strap that only has a small loop at the end. This style looks a lot more like the Russian sarafan, so it's origins may have been drawn from an intuitive leap based on a more modern garment.

For this garment, I decided to go ahead and use the double-loop strap construction. I do not like them aesthetically - they're ugly and roll around - but after re-reading a lot of my documentation, In the grave finds, it seems like only the loops underneath the tortoise brooches have been preserved, and nothing any higher than that.

Probably the most damning thing for the wider strap construction is that when I wear my apron dress, that part is covered by my tortoise brooch. Since that's the area that tends to be preserved, the fact that the construction's not in evidence leads me to believe the double strap is the way to go. 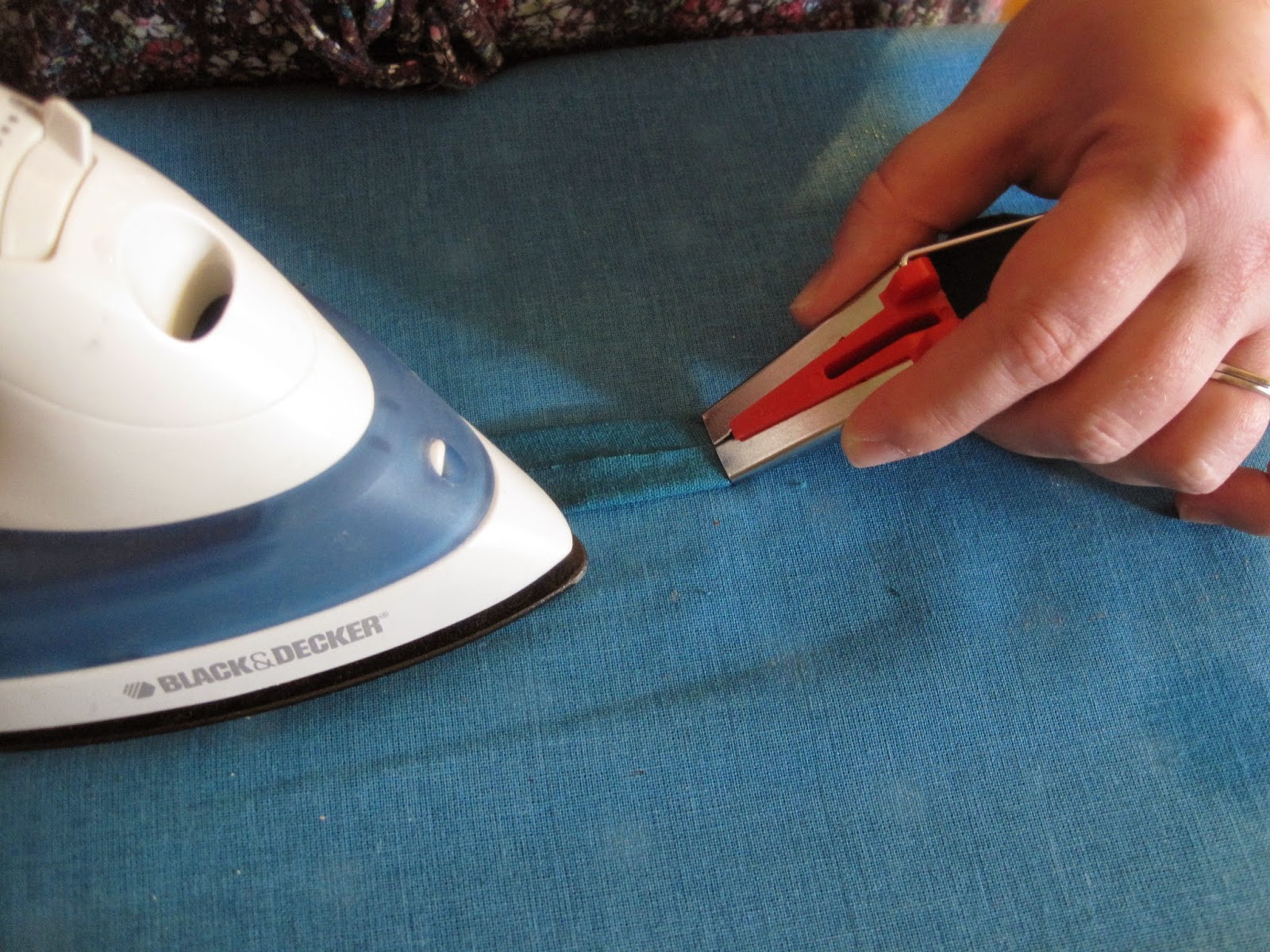 After all that, making the straps themselves was the easy part. I had a bias-tape maker on hand from one of my quilting projects, so it was easy to iron them quickly into submission. While I may have used a little technology to help, I did adhere closely to Thunem's example. 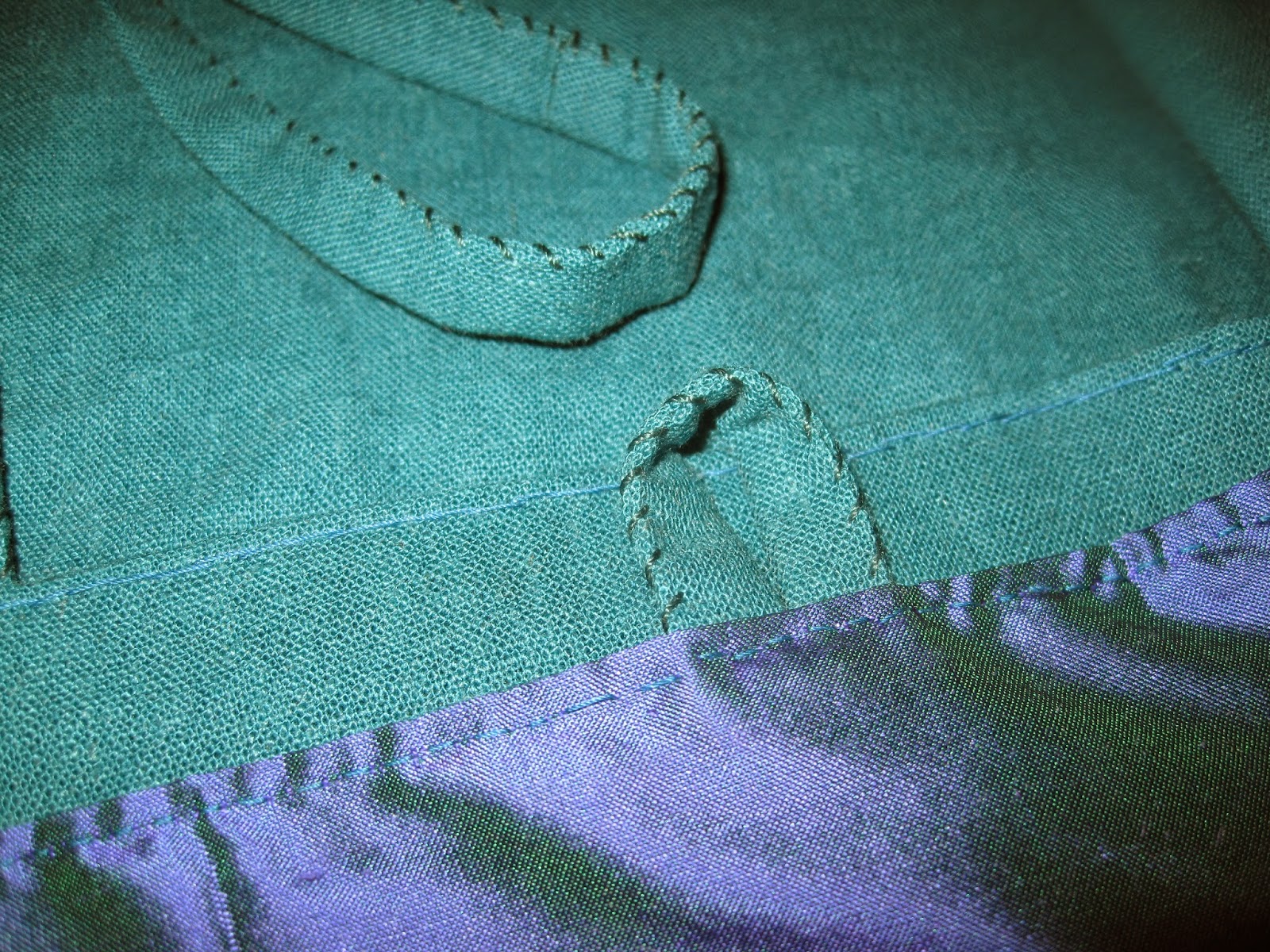 From there it was just some whip-stitching to close the gap. I decided to skip the running stitch I'd originally planned, as the first couple inches of it looked like more stitching than fabric! 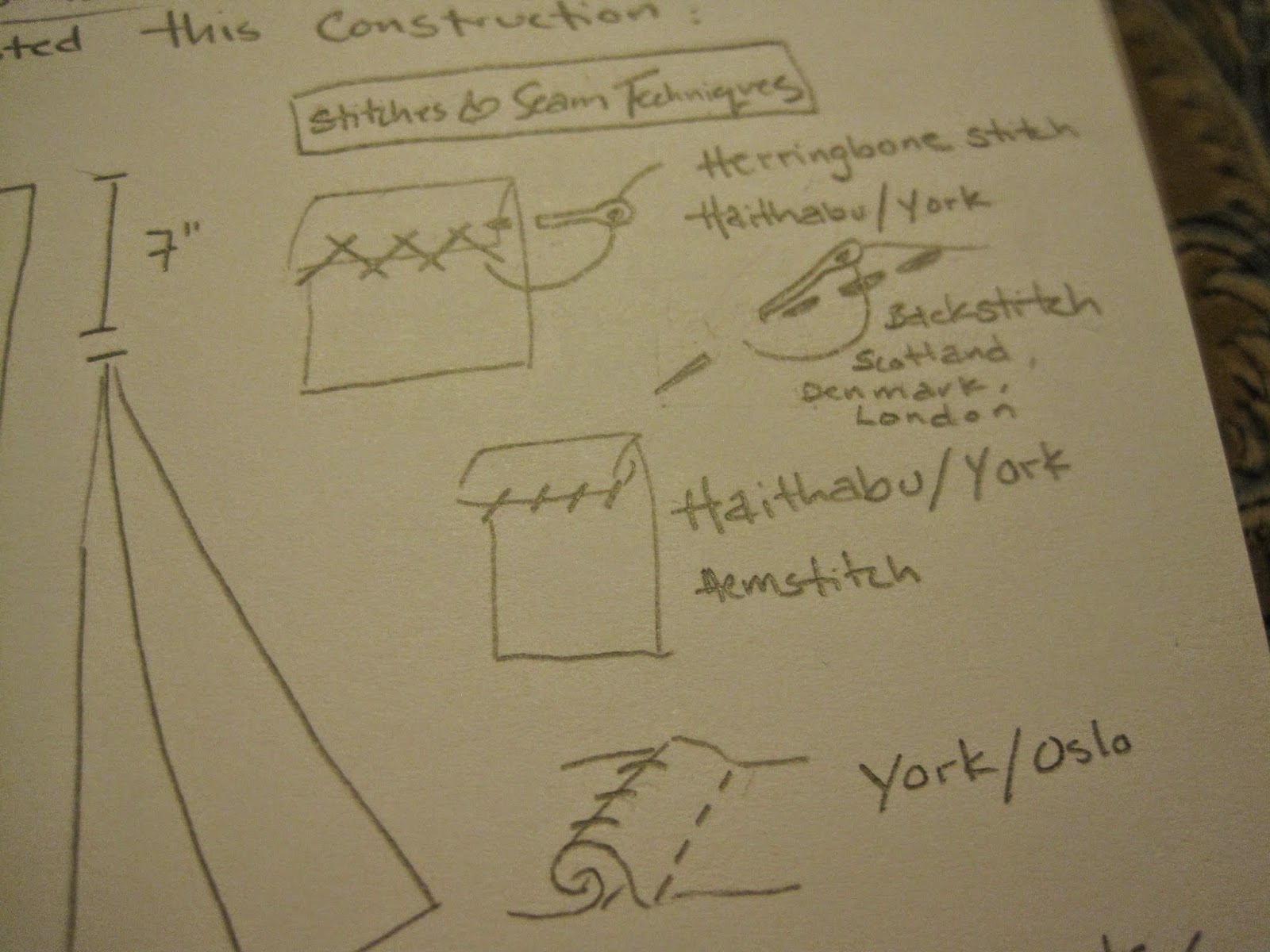 Next I needed to figure out what kind of sewing techniques would be period... and sturdy enough to keep my linen from raveling! I decided on four stitching types for the body of the garment: A backstitch (stronger than a running stitch on its own) with a flat fell, hem-stitch, and herringbone stitch. 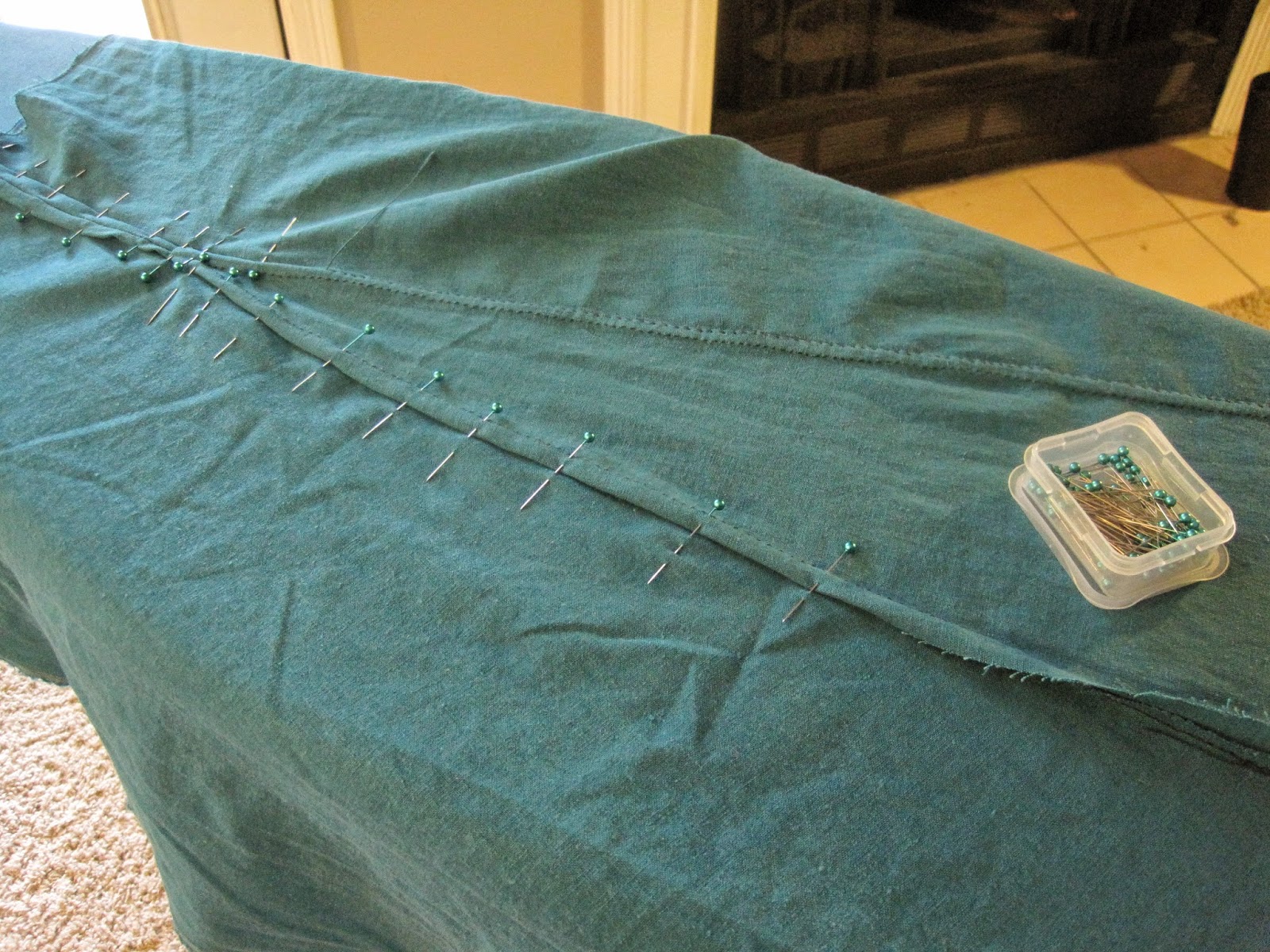 I used the same gore construction technique as the gray apron dress. Instead of matching up the edges, I made sure the gore seam allowance was longer than the rectangle I was sewing it to. 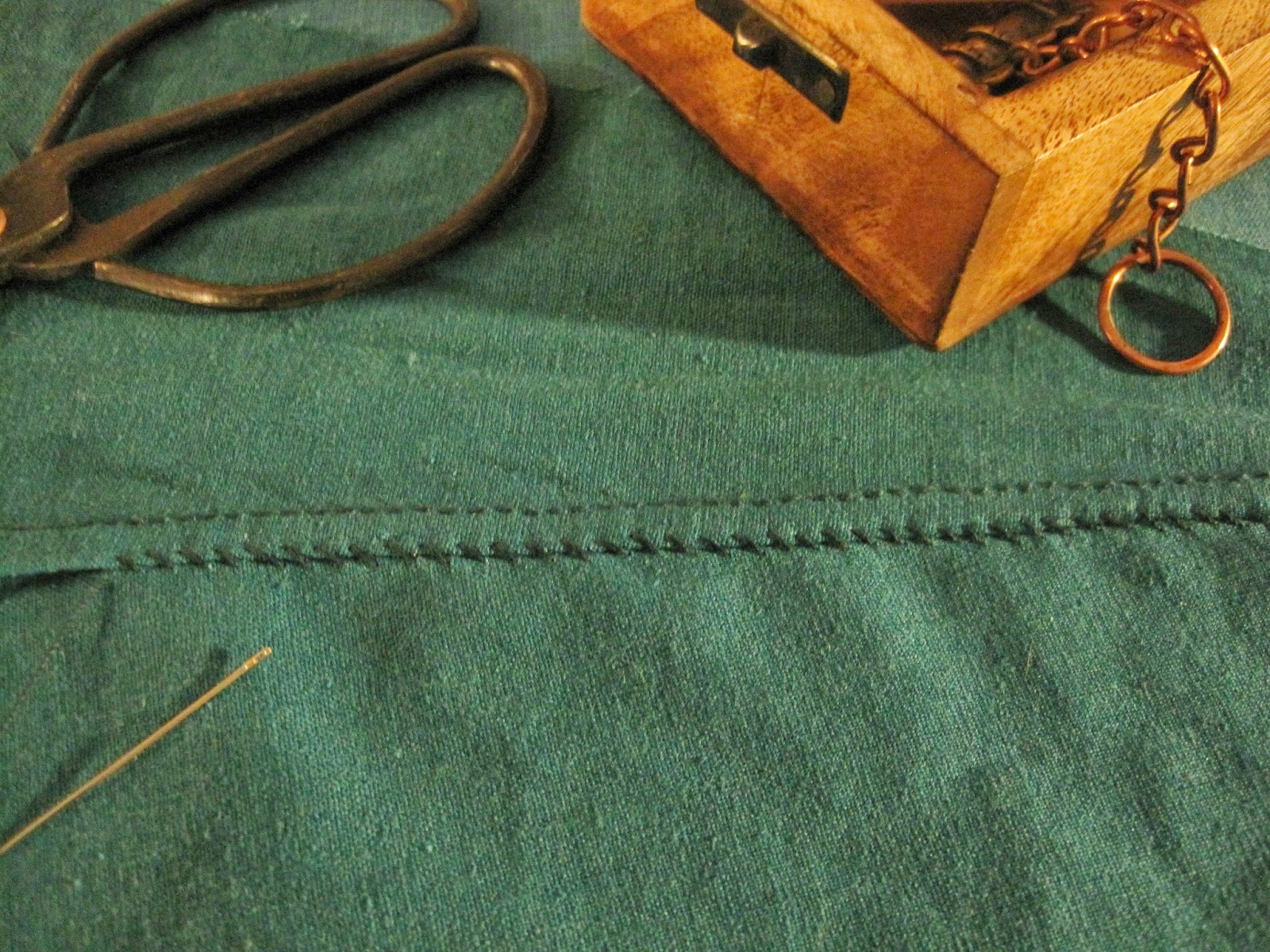 I used a backstitch initially, then went back over it by rolling the longer seam allowance over the shorter one and finished it neatly with a hem stitch. 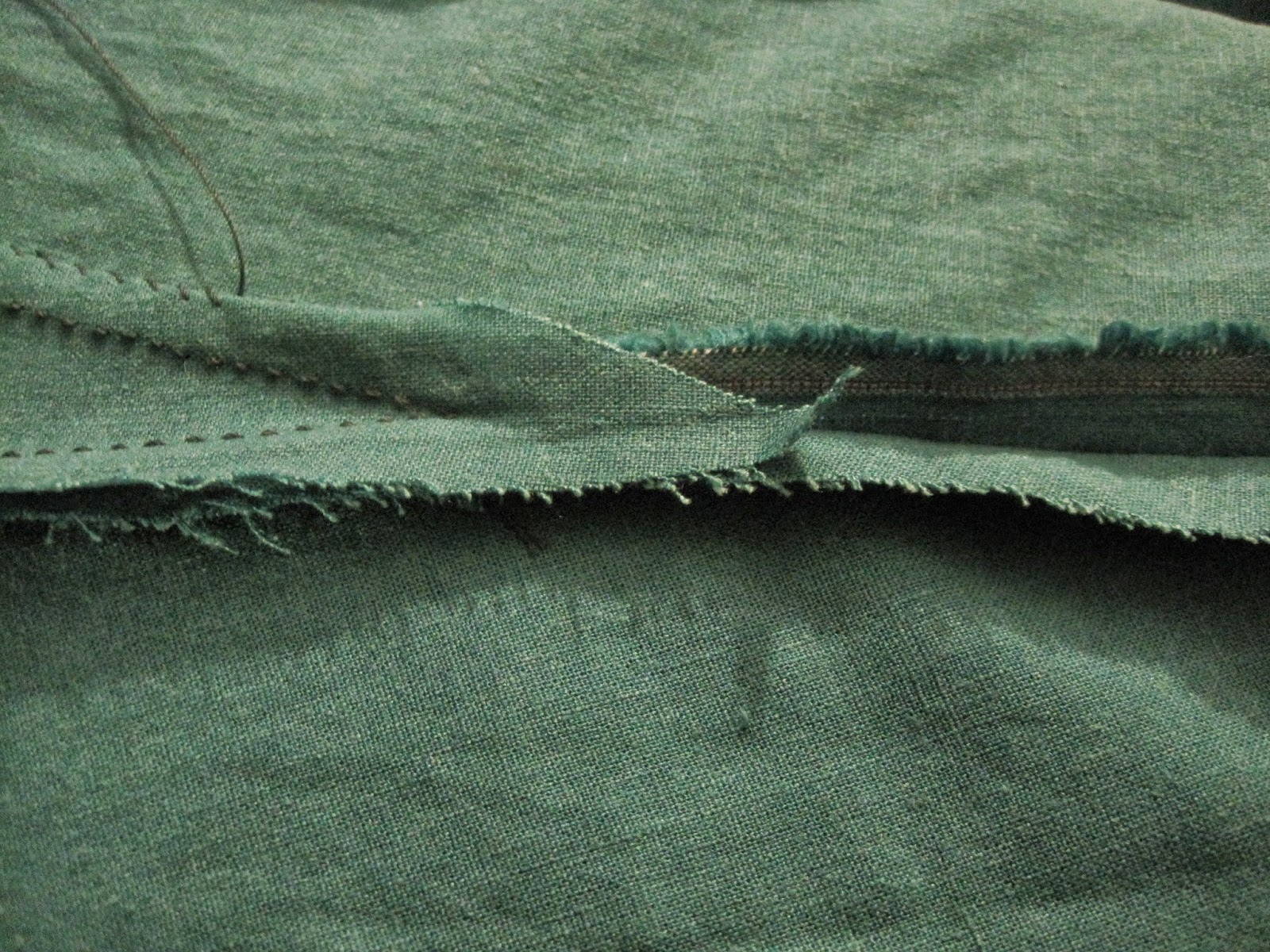 Here you see the point of the gore between two of the rectangles. I made sure to stop the backstitching when the seam allowances from both sides came together. 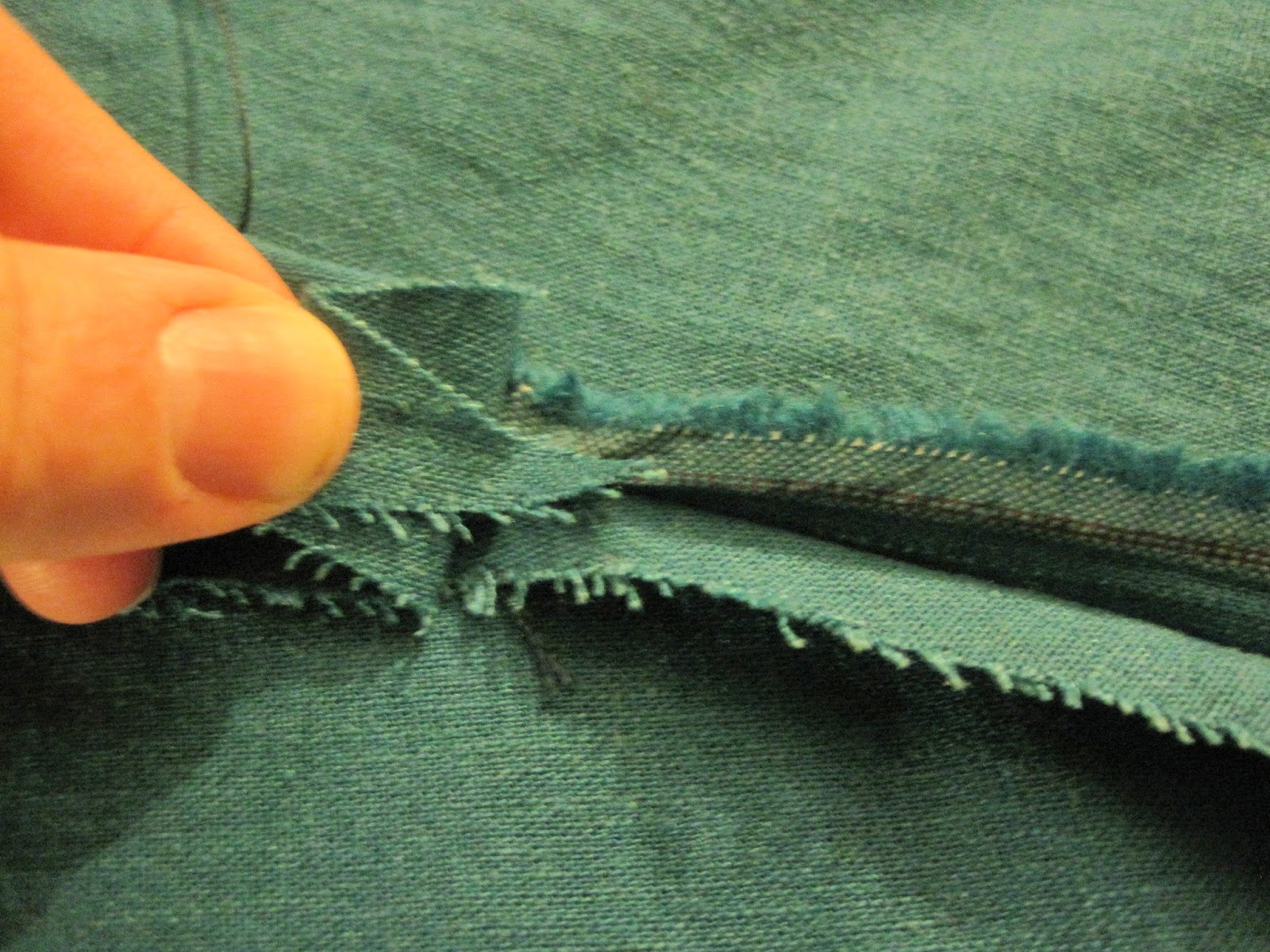 Next, I pinched the tip of the point under, and then... 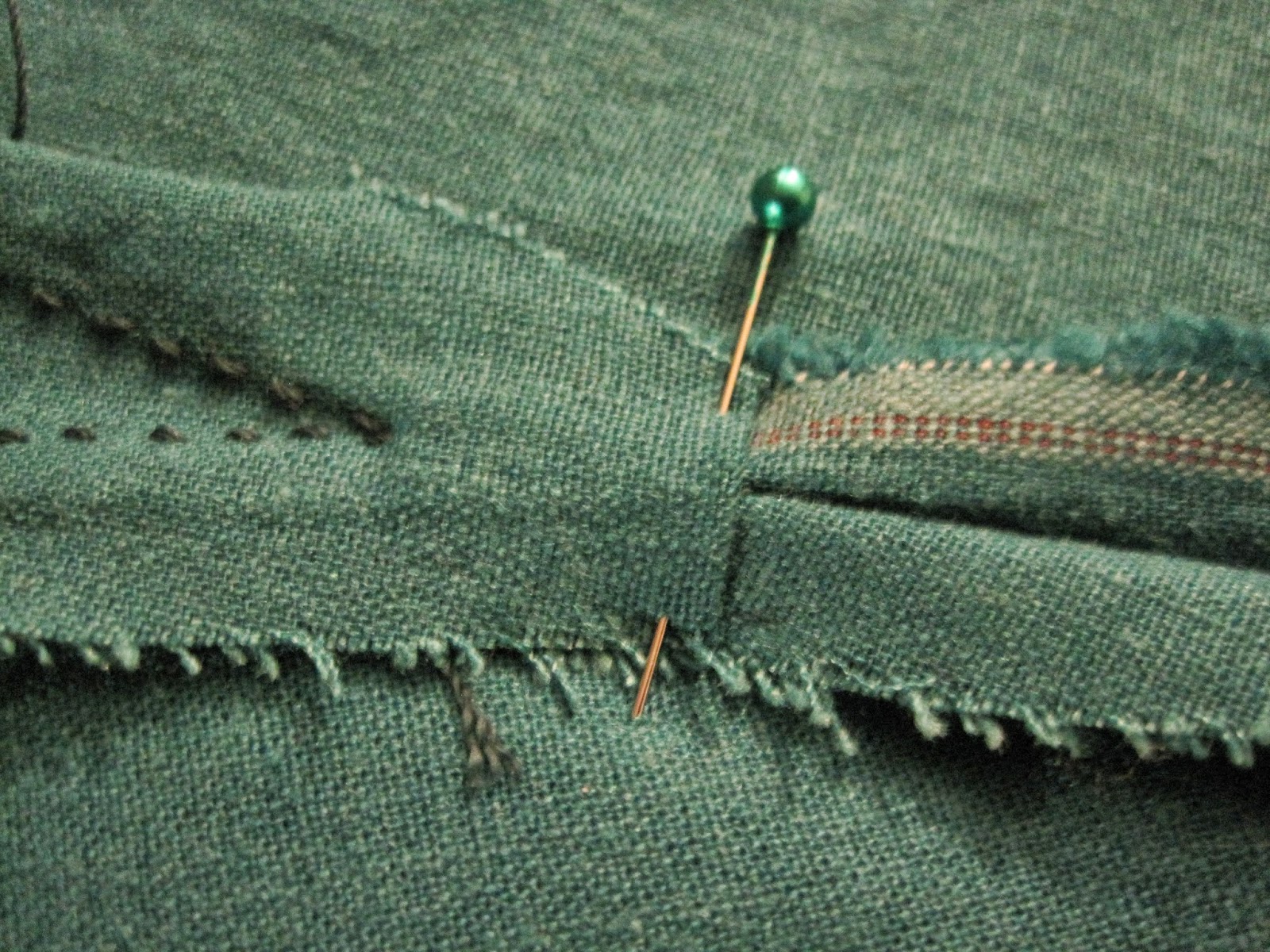 I pinned it down so I could start rolling the seam allowance over and cover the raw edge. 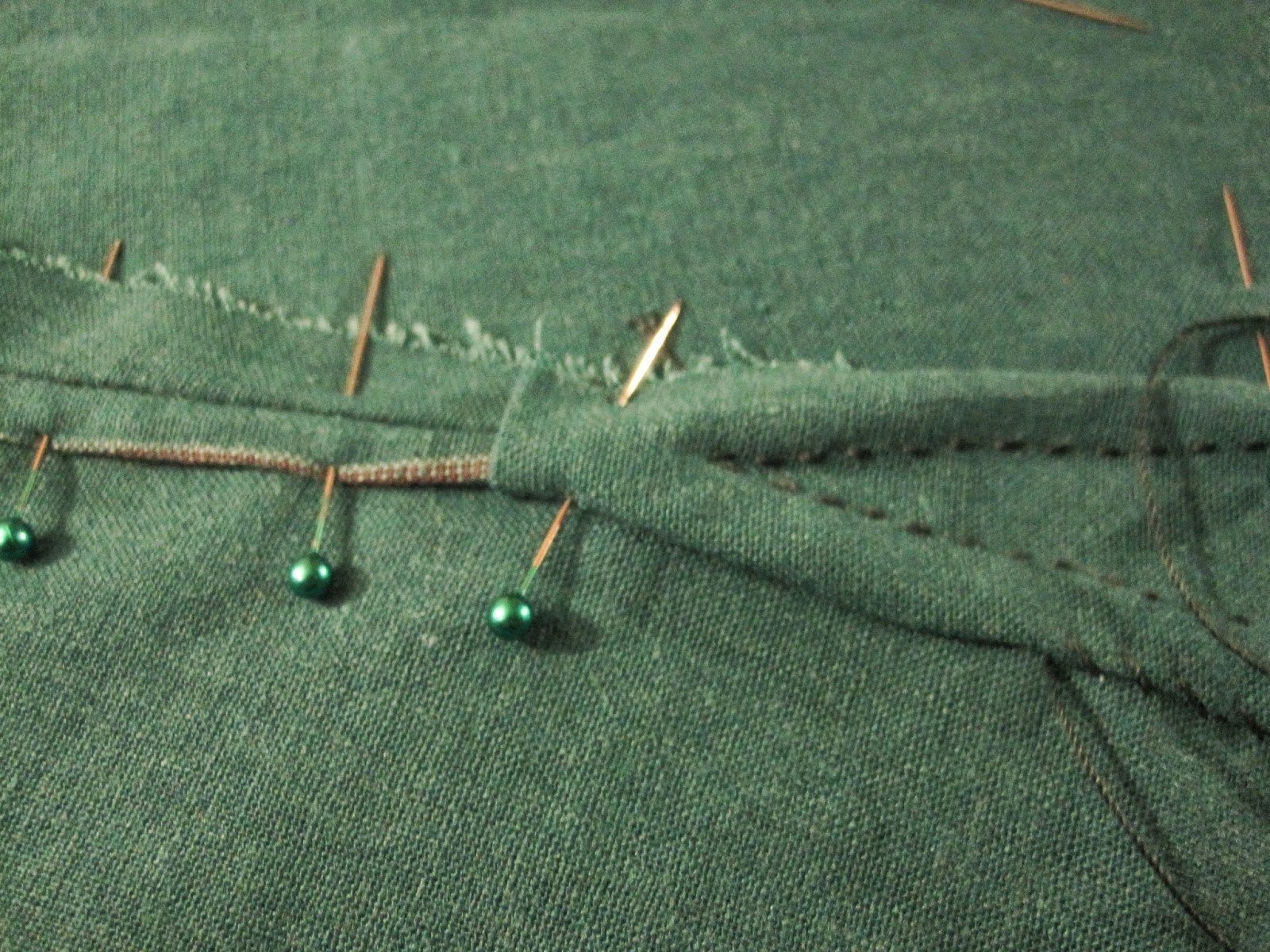 To save my fingers, it was easier to sew down one side at a time. Rolling and pinning both sides at once would turn my fingers into pin cushions! From there I was able to just continue sewing up the side with hem-stitch. I wanted two continuous lines of stitching on either side of the gore - not some random stitches to break up the lines - so I just came back to the top of the gore when I came back down the other side. 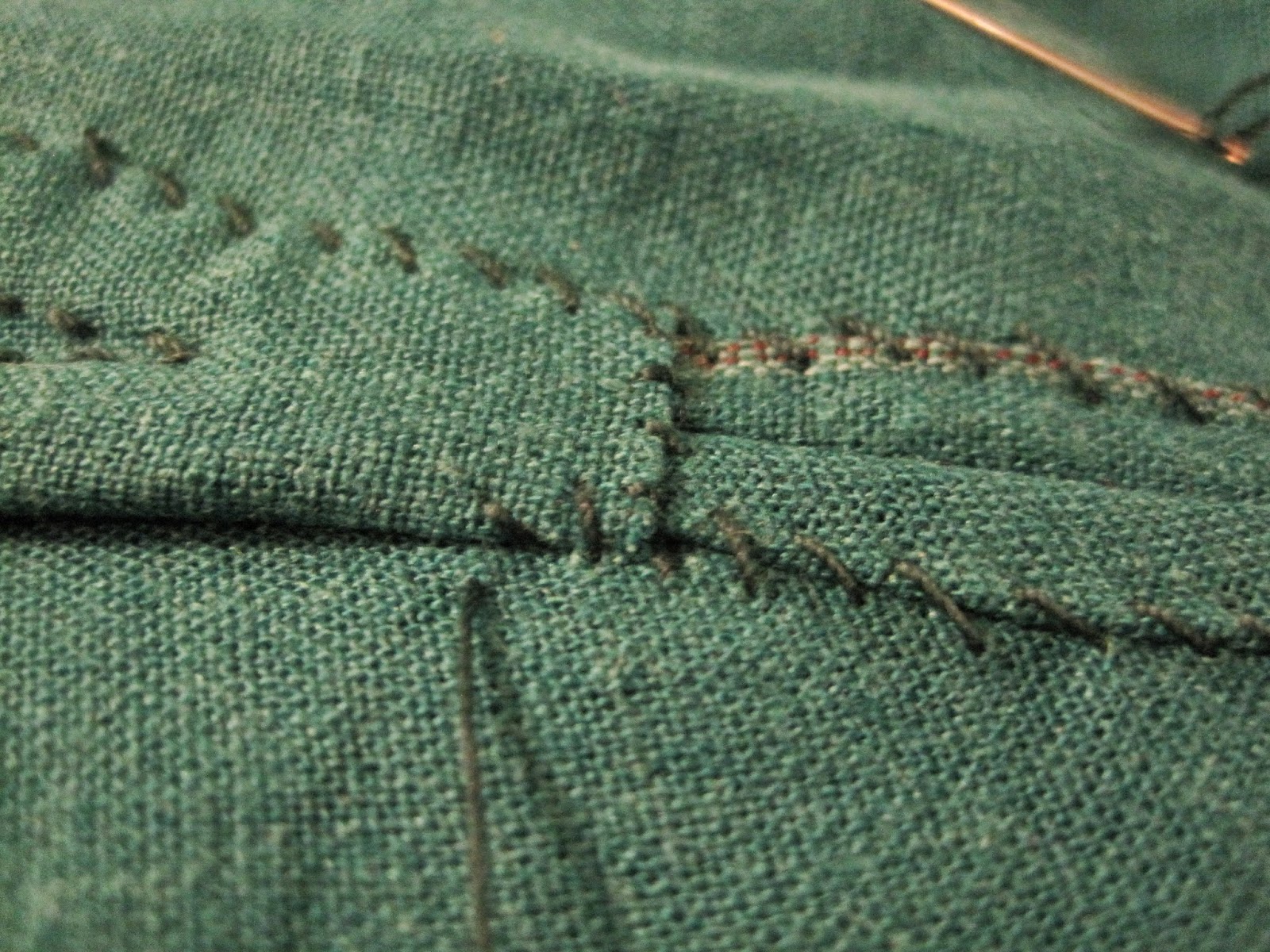 See? I took a quick detour over the flattened tip of the gore, but I was careful to only stitch the seam allowances together. I didn't allow my needle and thread to come out the front at all. 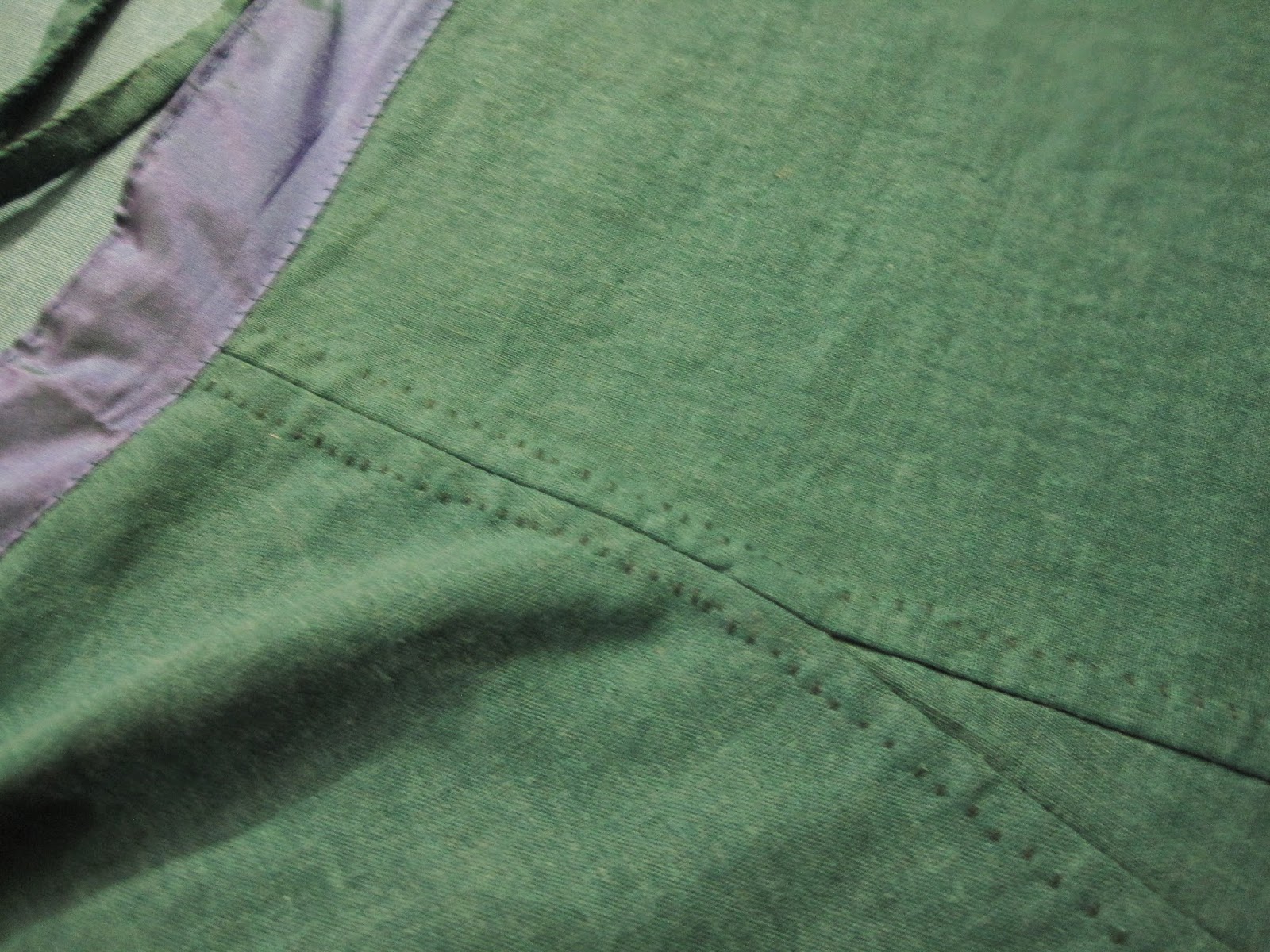 Here's the same seam from the front side. Just a perfectly flat gore with two lovely continuous lines of stitching. 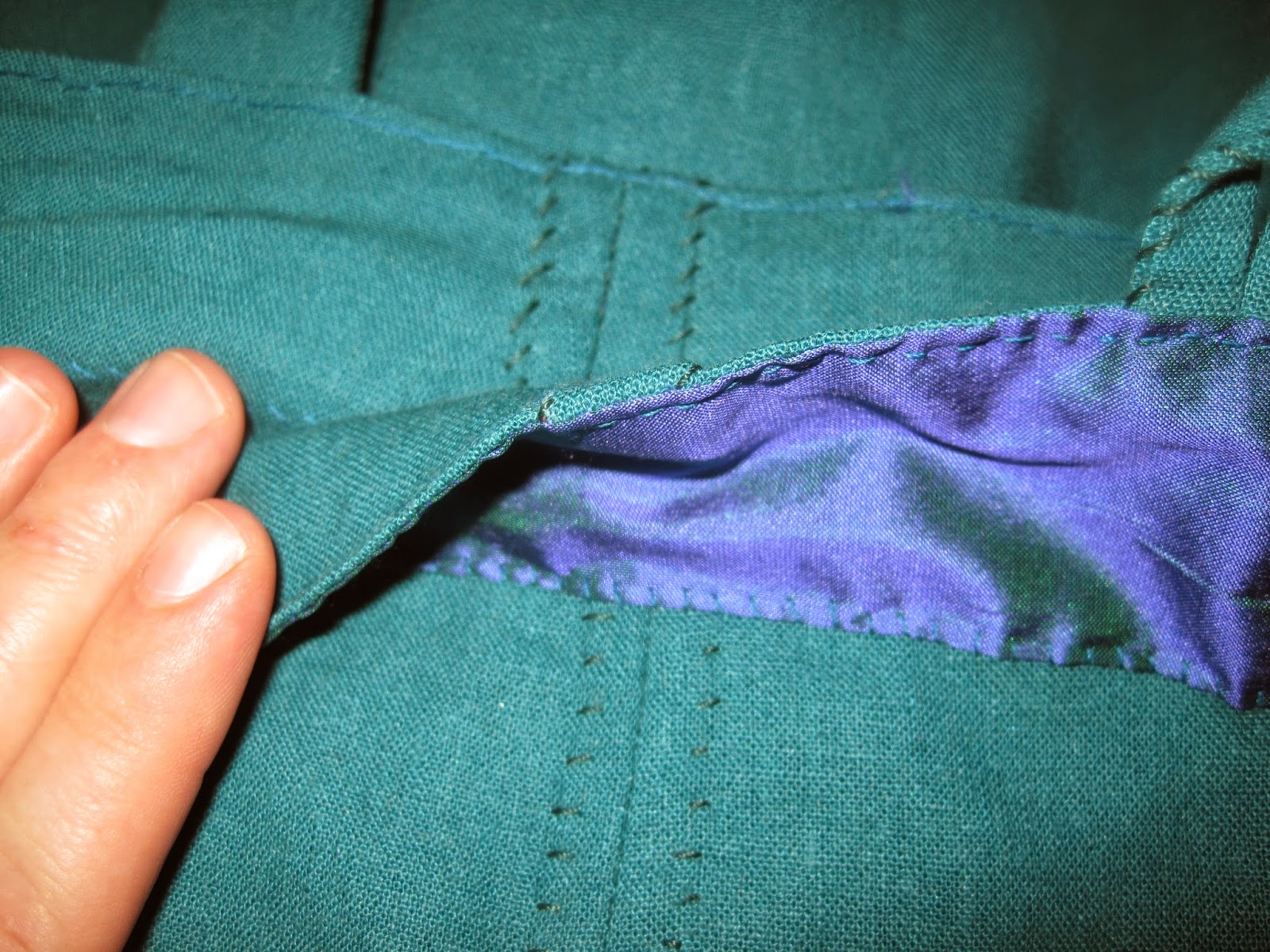 And the final step in the construction was to add the silk at the top. I've been hoarding about half a yard of this silk for the better part of a decade, and I decided it was about time to make use of it! I ended up using it structurally, and sandwiching the ends of the loops between the silk and the linen. I'm not sure how good of an idea that was, but we'll have to wait and see how it wears. 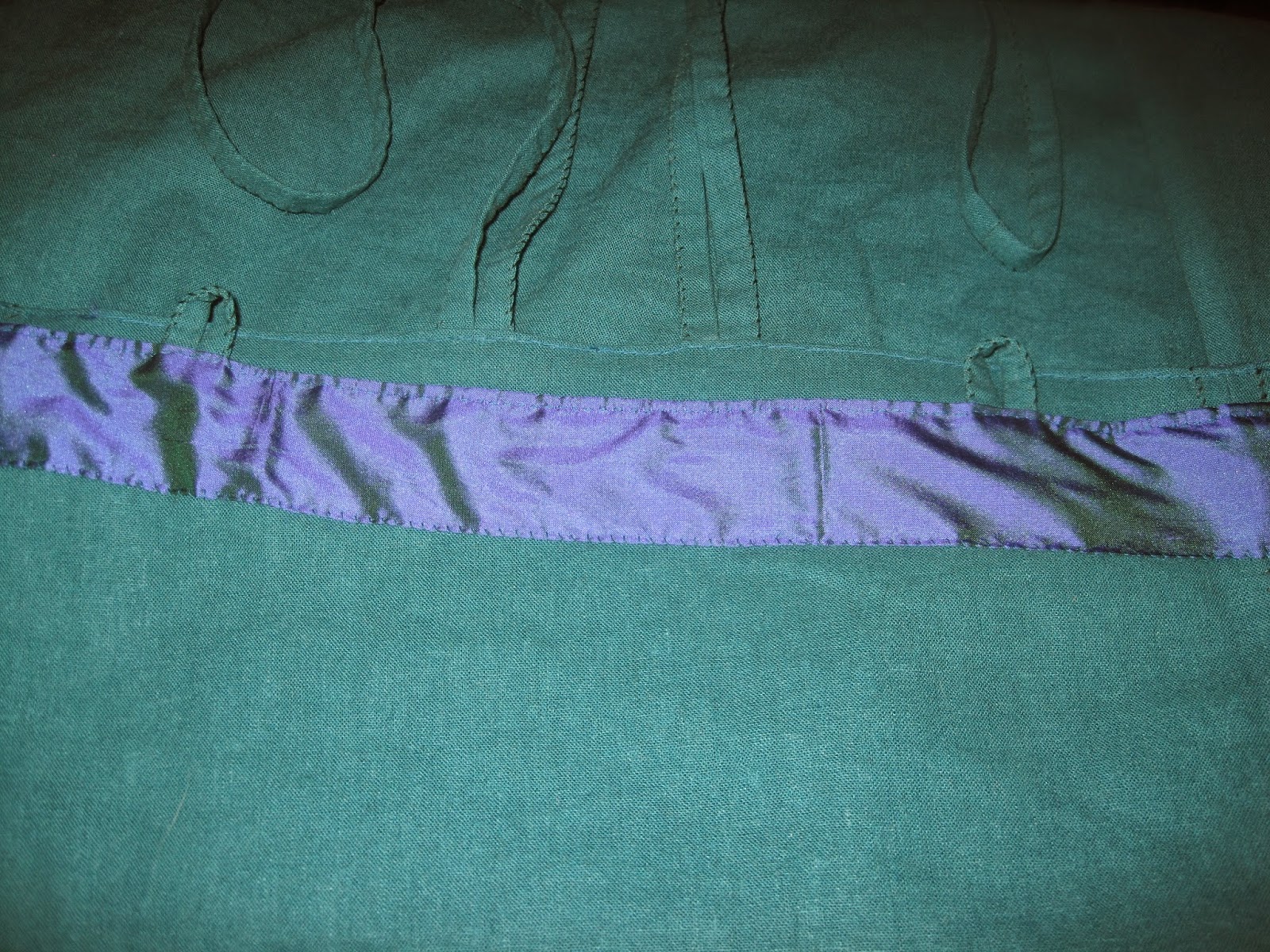 I'm just glad it's finally sewn down. It frays like a mother &#@%$#! I considered using pulled threads to sew it, but my teal silk thread was a better match because the warp and the weft are different colors. I sewed it together with backstitch, turned it right side out, then used a backstitch at the very top and a hem-stitch at the bottom.

And here I am in it. For now the basic construction is complete. It still needs to be hemmed and have the trim woven and attached, but that will be shown in Part 2.